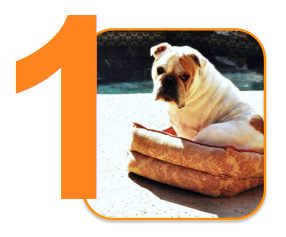 1. Most bulldogs can’t swim. Be prepared around bodies of water and get your pet a doggie life jacket.

2. Bulldogs are said to have average intelligence, but a French bulldog named Princess Jacqueline (she died in 1934) was claimed to understand and react to 20 words correctly.

3. The “bull” part of the bulldog’s name was applied in the 1800s when these dogs were used in the barbaric sport of bull baiting. This practice was made illegal in 1835 with the Cruelty to Animals Act.

4. Bulldogs were the fifth most popular pet dog in the U.S. in 2013, according the the American Kennel Club statistics on dog registrations.

5. In ABC’s Modern Family, Jay and Gloria own a French bulldog named Stella.

6. Hugh Jackman, Leonardo DiCaprio, Reese Witherspoon, David Beckham, Ashely Olsen, Hugh Jackman, Zac Efrom, and Martha Stewart are among many celebrities who own bulldogs. In fact, bulldogs are the most popular dog breed in Los Angeles.

7. The oldest single breed specialty club is England’s The Bulldog Club (formed in 1878), members of which met regularly at the Blue Post Pub on Oxford Street, London.

8. The only French bulldog aboard the Titanic, named Gamin de Pycombe, went down with the ship. A surviving passenger was later quoted as having seen a Frenchie swimming in the ocean after the sinking of the ship. 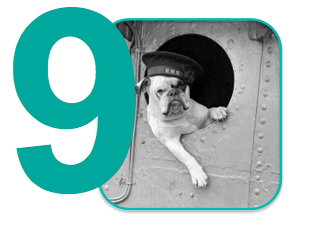 9. The bulldog is a popular mascot. Venus, a tough looking bully, was the mascot of the WWII Royal Navy destroyer HMS Vansittart.

10. Bulldogs have suffered the most airline deaths due to their respiratory/heat regulation issues, and many airlines now ban them from flights. If you do need to fly with your bulldog and get airline clearance, be sure you have cool water and other cooling methods available to keep your pet safe.

11. The bulldog’s large head makes it difficult to deliver him by natural birth. So, more than 80 percent of bulldogs are delivered by caesarean section.

12. Bulldogs generally love to eat and can be testy if disturbed while eating. 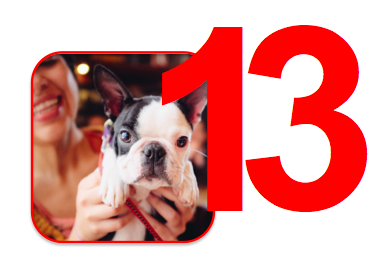 13. French bulldogs are the smallest of the popular breeds in the U.S., with American bulldogs weighing in with the largest adult sizes.

14. Bulldogs slobber, snort, snore, and get gassy at times. It’s part of the adorable factor.

15. Pedigreed bulldog puppies are not cheap, and a puppy from a reputable breeder will cost you, but he’s worth it.

16. Many bulldogs have a side-to-side swagger that can make children giggle with its cartoonish gait and comic rhythm.

17. Bulldogs don’t like being pinched, teased, or yelled at. Who would? Teach kids to play nice and bulldogs are generally loving and wonderful companions for them.

18. Bulldogs often make good watch dogs if trained properly to recognize the difference between a friendly stranger and an intruder. 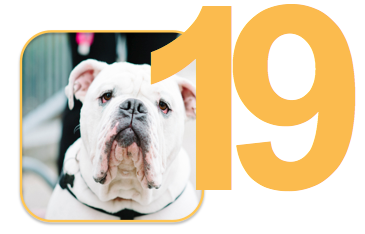 19. Bulldogs can be on the stubborn side. Be sure to establish dominance and regular walking schedules to get him used to a routine and know who is boss!

20. Olde English bulldogs can jump up to seven feet in the air. Be sure to give these pets plenty of fetch time!

‹ 10 Signs a Bulldog is For You up Distinguishing Bulldog Traits ›