History and Origin of the Modern Bulldog

The kind and resolute traits of the modern bulldog as described by the American Kennel Club strike a sharp contrast to the aggressive origins of the breed. Originally bred for farming activities and then for the (now widely illegal) barbaric blood sport of bull-baiting, bulldogs have come a long way as domesticated pets -- with much credit due to judicious breeders and trainers.

The bulldog can be traced as far back as the 5th century in England, when the breed was used to help butchers and farmers control livestock. The first mention of the dogs was referenced in literature around 1500 as "bondage" or "bolddogge." The dogs were bred to be aggressive enough to help catch horses, cattle, and boar and also to help farmers herd the animals. The aggressive traits of the bulldog led to the breed being widely used by the 15th century in bull-baiting, and it was at this time that the name "bull" was assigned to the breed. A precursor to the entertainment barbarism provided by gladiator battles of the Roman Coliseum, bull-baiting involved setting trained dogs against a bull tethered to a fence or other structure. The dogs were trained to attack the bull's nose and hold on until it had pulled the bull to the ground, or the bull had killed the dog. An entertainment and gambling sport, bull-baiting was finally banned by the passage of the Cruelty to Animals Act in 1835, after more than three centuries of the dogs being bred for aggression. 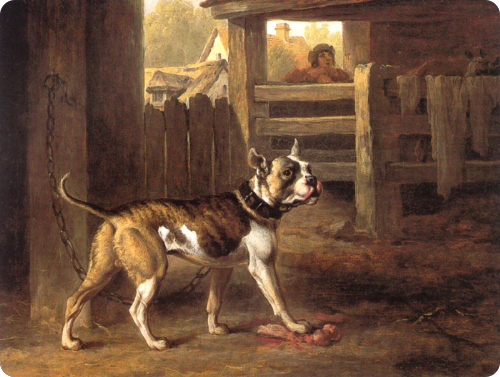 The end of bull-fighting called into question the future of the breed, as the purpose for which it had been originally bred was no longer. But emigrants from America, England, and Germany found new work for the dog. In New York in the mid-17th century, bulldogs were used by government officials to help with the dangerous task of rounding up wild bulls. Taking advantage of the breed's previous sporting skills, the dogs were trained to latch onto a bull's nose while a trainer maneuvered a rope around the bull's neck. The dogs were also used in the American South to herd hogs and cattle, in areas with rough terrain that could not accommodate fencing as a means to keep the animals contained.

Bulldog crossbreeding in Germany eventually created the boxer, and in England, breeding with smaller dogs eventually led to a smaller bulldog. The shorter, wider bulldog recognizable today with its distinct pug-like nose is the result of these efforts. Even with its fighting look, the modern bulldog has nowhere near the temperament of his ancestors. This change in the breed was beginning to become clear even at the time in England, when The Bulldog Club, meeting frequently at a pub on Oxford Street, held a competition between two top bulldogs to see which could walk 20 miles. While the dog most resembling the breed's origins went on to win the competition, the breed more similar to today's bulldog collapsed before the finish line.

Today, bulldogs of many breeds -- showing a patient and friendly temperament and intense loyalty toward their owners -- make ideal household pets, and are widely used in advertising and as popular mascots.