One of the most popular and family-friendly bulldog breeds, the American Bulldog is a reliable and loyal pet who generally gets along well with children. This dog should have a strong, dominant master so as not to become aggressive toward other dogs, and early socialization to develop healthy relationships with house guests and appropriate behavior toward strangers. Daily exercise is also recommended to moderate this dog’s energy levels. 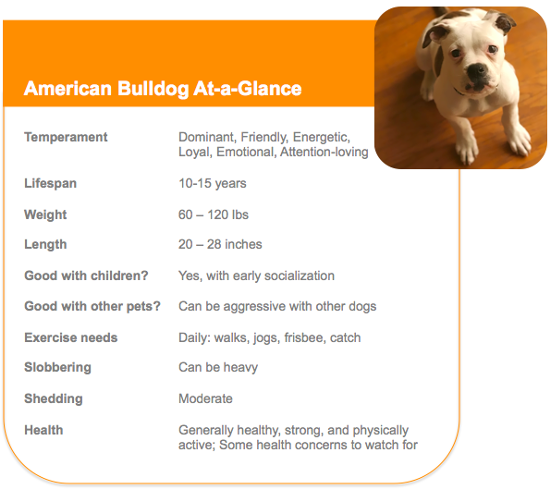 Most adult American bulldogs are very strong looking with a stocky, muscular build. These dogs have historically been bred as one of two types -- the Bully type or Standard/Performance type -- however, many American Bulldogs today are a hybrid of these two types. Those dogs that do still fall into the two categories can be distinguished from each other by size. The Bully type tends to be a larger, heavier dog with a shorter muzzle while the Standard/Performance type is often more athletic with a more square head and longer muzzle.

Distinguishing features of the American bulldog include:

Confident, social, and active, American bulldogs are generally at ease with a loving and nurturing family. These pets can be quite emotional and should be given plenty of attention, as they will want to bond strongly with their owners. American bulldogs are quite tolerant of children and often bond closely with them as long as they are socialized early and have a dominant owner who teaches the dog clear limits. Other temperament features to keep in mind include:
Aloofness with strangers is not uncommon for American bulldog puppies, though they generally grow more confident and at ease with time and age.
Training as well as early and often exposure to other dogs and people help ensure success in controlling this breed.
Early socialization both inside and outside the home are essential.
Adult American bulldogs can be quite aggressive with other dogs, particularly males with other male bulldogs. Owning other pets may not be a good idea for the pets and their family.

American bulldogs are often droolers, so it’s important to keep the folds around their mouth and neck clean. It’s also a good idea to clean out their water and food dishes daily or at least on a very frequent schedule, as they will often leave residue on them.

Shedding is moderate for American bulldogs, and can be contained with daily brushing.

These pets usually live between 10 and 16 years and are usually healthy and physically active. Some common health concerns in American bulldogs to watch for include:

American bulldogs are strong pets and should remain fit. They sport dense muscles that allow them to jump seven feet or more. They love physical activity and should be walked daily if possible. This will also help with important socialization, in addition to giving your bulldog the activity and owner-pet bonding time he craves. Frisbee, catch, and jogging with his owner are also favorite activities and will help keep the energetic American bulldog from becoming high strung. While American bulldogs love outdoor physical activity, they are not meant to be kept outside for extensive periods of time alone -- they like to know that they are an important part of the family.