Sometimes called the Original English Bulldogge, this relatively new breed was bred in the 1970s by crossing English bulldogs with pit bulls, bullmastiffs, and American bulldogs. The goal was to create an athletic dog similar in appearance to bulldogs used for bull baiting in the 1820s, but with a far less aggressive and much more friendly temperament.

The Olde English bulldogge likes to know that he is important to his family. These dogs tend to be bold, energetic, and somewhat fearless. Regularly, owner-led exercise is a must. Owners should be calm, loving, consistent, and always assertive to keep this dog from becoming overly stubborn or harboring aggression. 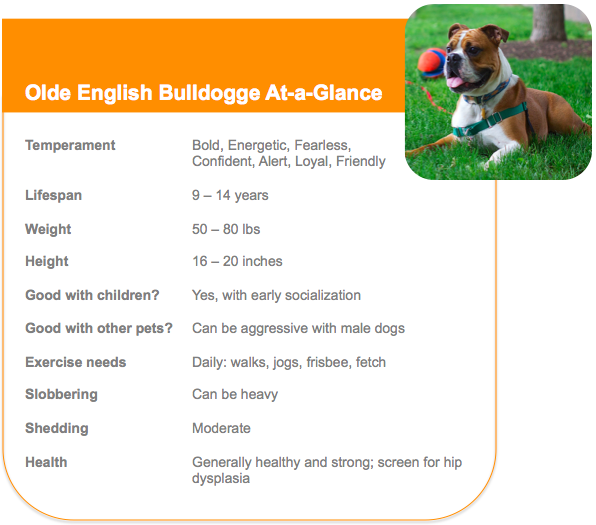 The Olde English bulldogge is a muscular, medium-sized dog with balanced proportions and great athleticism. These pets are quite agile and graceful with fluid movements that beg for practice through regular exercise. Like all bulldogs, these pets have characteristic wrinkles around the neck and jaw, but the Olde English bulldogge does not have nearly the number of folds as some other bulldog varieties. Other appearance characteristics include:

Olde English buldogges make great companions, but require early socialization, training, and clear dominance from their owner. Because of their genetic lineage, these pets are quite capable of performing farm work as well. A well-trained Olde English bulldogge is confident, alert, and generally friendly. These pets are lovable and loyal, provided that both adults and children in their human family learn proper training techniques and behavior to keep this dog healthy, happy, and secure.

Generally speaking, the athletic Olde English bulldog tends to be healthier and more fit than many other varieties of bulldogs, though some health concerns should be watched for. Hip dysplasia is common among all bulldog breeds, and some Olde English bulldogge breeders are now having puppies x-rayed as a precautionary measure, and the University of Pennsylvania Hip Improvement Program (PennHIP) provides screenings and conducts research for treatments.

Olde English bulldogges are not as susceptible to overheating as other breeds, due to their strong breathing and large nose. While they may not need as much caution to be kept cool in the summer months, never leave any pet in an excessively warm environment for long.

Olde English bulldogges are very strong and athletic and require rigorous exercise to remain fit and agile. These pets love to go for walks and jogs with their owners, and a rigorous game of fetch or frisbee is also good for this pet. Olde English bulldogges are also growing in popularity for obedience training, weight pulling, and therapy training.